In the previous financial year, 2015/16, the Archive and Dialogue Division reached the consolidation phase of our five-year strategic plan (2013 to 2018).

In the previous financial year, 2015/16, the Archive and Dialogue Division reached the consolidation phase of our five-year strategic plan (2013 to 2018).

Over the past year, we achieved significant success in turning toward digital strategies, creating opportunities for research and opinion pieces and using dialogue work to influence policy and “action-orientated” solutions.

In the previous financial year, 2015/16, the Archive and Dialogue Division reached the consolidation phase of our five-year strategic plan (2013 to 2018), producing consistently high-quality, diverse content with the support of its stable and experienced team.

Two key areas were noticeably enhanced: Our capacity to deliver difficult “safe-space” dialogues in both local and international contexts and the generation of fully described digital archival content (through international standard metadata envelopes).

The dialogue and advocacy programme continued under the broad rubric of inequality. Rather than just focusing on the economic ramifications of inequality, we also explored the various manifestations and the historical underpinnings of inequality. The year has been highly successful, and we made an impact through high-profile events as well as smaller, high-level dialogues.

Over the past year, we achieved significant success in turning toward digital strategies, creating opportunities for research and opinion pieces and using dialogue work to influence policy and “action-orientated” solutions. The Nelson Mandela Foundation dialogue team has hosted more than 20 open and closed dialogues over the past year, using three key delivery vehicles: 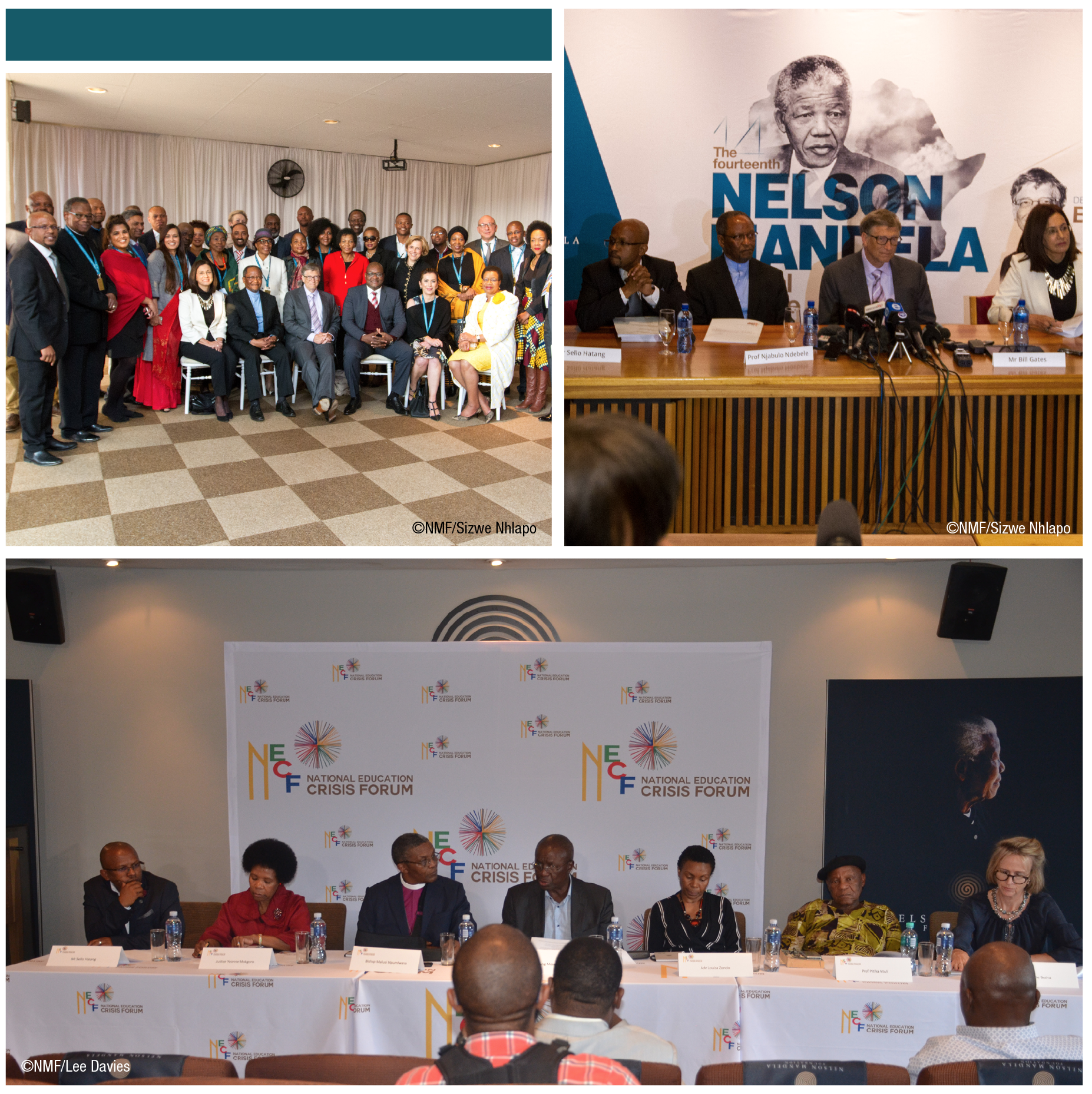 We also had the pleasure of hosting an encounter between visiting Canadian rapper Drake and young South African performing artists.

The Nelson Mandela Annual Lecture Series, inviting prominent people to drive debate on significant social issues, is an important event on the Foundation’s calendar. Bill Gates, co-chair of the Bill & Melinda Gates Foundation, delivered the 14th  Nelson Mandela Annual Lecture on 17 July 2016 on the eve of Mandela Day. His topic was “Living together”.

The event had significant impact. Two focus group dialogues were convened in the run-up to the lecture, one with University of Pretoria students and one with social commentators. We also convened an open dialogue on philanthropy as a follow-up, creating a necessary conversation on how philanthropy operates in the country.

Our dialogue and advocacy efforts remain deeply committed to supporting the struggles of young people. The most high-profile intervention has been the National Education Crisis Forum (NECF), formed to address South Africa’s tertiary education crisis at multiple levels. The Forum’s secretariat was hosted by the Foundation. The NECF has hosted a number of preconvention engagements and created opportunities for dialogue.

The Foundation is also part of a working group that includes Doctors Without Borders, The International Committee of the Red Cross, the Wits Health Consortium and the South African Police Service, working to develop a set of guidelines on the provision of health services during protest action. Before the establishment of the forum, we were involved in interventions at four Universities: the University of Pretoria, University of the Witwatersrand (Wits), North-West University and the University of the Free State. 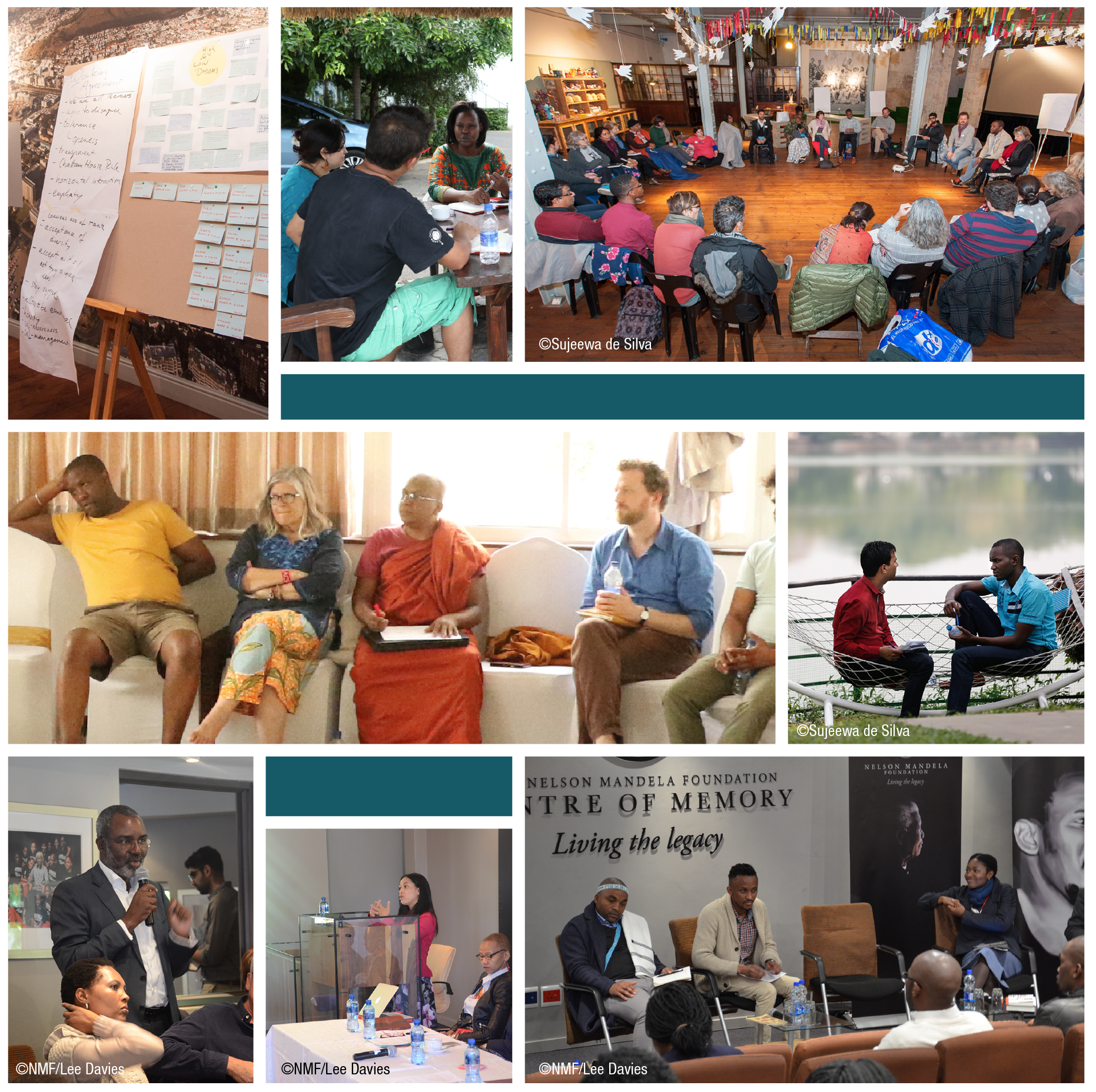 Over the past year, the Foundation has also sought to better understand the complexities of the education crisis.

In order to broaden our reach through digital communications, we have established a long-term partnership with the Hanns Seidel Foundation to support the Civics Academy (www.civicsacademy.co.za), a non-profit online civic-education resource. In April 2016, the Foundation hosted a one-day pilot dialogue with young people to test the academy’s resources.

We also had the pleasure of hosting an encounter between visiting Canadian rapper Drake and young South African performing artists in collaboration with the South African government in June 2016.

We have created a dialogue space to understand the dynamics of land ownership and traditional leadership in South Africa.

The Foundation remains deeply engaged in convening dialogues around race and identity, but has also looked toward building capacity in anti-racism efforts. Our key project is the Atlantic Fellows for Racial Equity, a partnership with Atlantic Philanthropies and Columbia University that was launched in October 2016. The first cohort of fellows will be welcomed in January 2018.

We remain part of the Anti-Racism Network of South Africa (ARNSA) and were instrumental in the national communications campaigns for Anti-Racism Week, securing coverage in national and local newspapers, on billboards across the country and during two of the South African national cricket team’s T20 games.

In July 2016, the Foundation hosted a two-day ARNSA colloquium with the theme “Reckoning with Race” and in October we co-convened the annual ARNSA conference at Constitution Hill, with a specific focus on practical anti-racism actions. Organisations working on practical anti-racism strategies, such as the Wits Centre for Diversity Studies, the Democracy Development Programme, Standard Bank and the Institute for Justice and Reconciliation attended the conference and shared their experiences and tools.

In March 2016, the Foundation convened a dialogue on Afrikaner identities in collaboration with the Ahmed Kathrada Foundation and the University of the Witwatersrand and, in July 2016, partnered with the Steve Biko Foundation on a dialogue on reconciliation in King William’s Town.

In February 2017, we hosted a dialogue on social cohesion with European Union representatives. The Foundation also made written and oral submissions to the Human Rights Commission’s hearings on racism and social media in South Africa, which concluded in February 2017.

We have created a dialogue space to understand the dynamics of land ownership and traditional leadership in South Africa. In April 2016, the Foundation partnered with the Council for the Advancement of the South African Constitution (CASAC) in convening a focus group on land and traditional leadership. As a result, a submission on land reform was made to Parliament’s High Level Panel on key legislation. Research commissioned as part of the process also led to significant public engagement, including discussions with political parties.

Between August 2016 and February 2017, the Foundation co-convened several dialogues between Agri SA, a federation of agricultural organisations, and civil groupings to look for civil society-driven solutions for building sustainable rural communities.

The Foundation remains deeply committed to understanding poverty and inequality in South Africa. Our partnership with a university-led think tank led to the development of The Mandela Initiative (MI), a cross-sector, cross-disciplinary project to inform strategies against poverty and inequality. The MI seeks to generate a national conversation on arguably the biggest challenge facing South Africa. A dedicated website (mandelainitiative.org.za) has gone live and staff have been recruited for the project.

We continue to promote dialogue on memory work and reckoning with oppressive pasts. In October 2016, we hosted a dialogue on science and ethics with young scientists in concert with the Poisoned Pasts exhibition.

The Foundation has also hosted dialogues with the embassy of Chile and the University of Pretoria on the politics of transitions, and welcomed a dialogue with the embassy of Algeria, with Ambassador Noureddine Djoudi delivering a lecture about events in 1962 when he served as English translator for Nelson Mandela during his visit to Morocco.

We hosted the second series of Nelson Mandela International Dialogues with the GIZ Global Leadership Academy, with 10 countries represented and encounters in Cape Town, Rwanda and Sri Lanka during 2016. A series of reflections were written following the dialogues and projects funded by GIZ based on the work.

As a result of the Mandela Dialogues, the Foundation also hosted a study tour in February 2017 by the peace organisation the Centre for Nonviolent Action, focusing on cross-border work throughout the Balkans.