The organisation’s profile has grown immensely as a result of the role it has played in the national discourse, mainly on issues relating to South Africa’s socio-economic situation. The Foundation has employed various communication platforms to amplify the messages of programmes such as Mandela Day, the international dialogues and the profiling of the memory work. These include all forms of mainstream media, as well as social media.

The Nelson Mandela Foundation brand has correctly been always linked with that of its founder. The efforts over the past year to communicate the Foundation’s work have increased awareness of the brand and that of its programmes.

Looking ahead to the next year, the Foundation’s organisational identity will be supported by a solid brand strategy, aligning how the brand is associated with its work. The Foundation has identified this as a priority.

Over the past year, the Foundation has hosted a number of events that positioned it as a strategic partner in creating space for dialogues.

The 14th Nelson Mandela Annual Lecture delivered by Bill Gates was widely covered globally and led to a number of follow-up dialogues around philanthropy and responsibility. One of these, held in October, was titled “Philanthropy in the New Gilded age”. 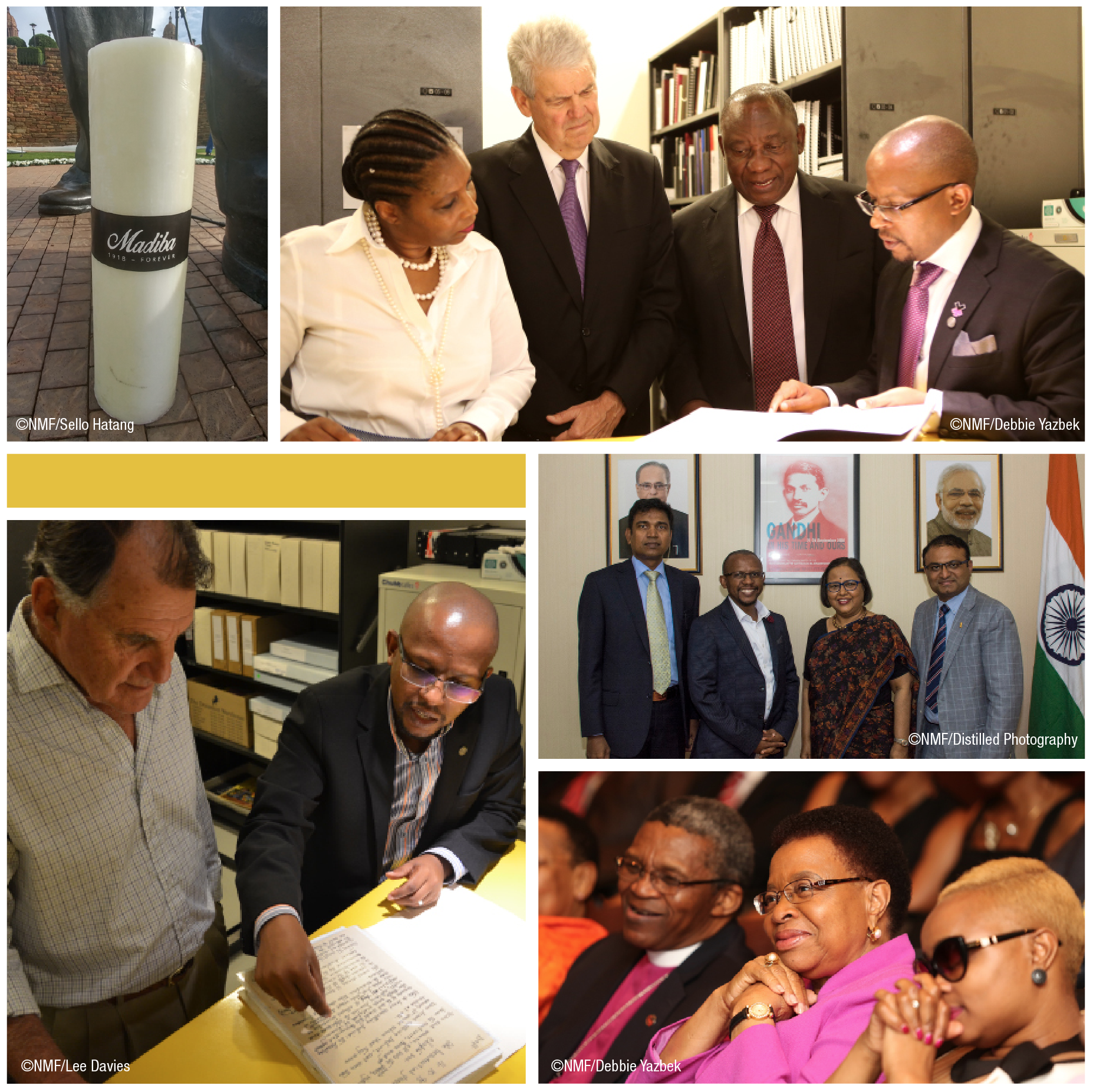 South Africa and the rest of the world is beginning to relate to the period from 5 to 10 December as a time to remember Nelson Mandela, as this was the mourning period following his passing in 2013. On 6 December 2016, the Foundation hosted a dialogue with Deputy President Cyril Ramaphosa delivering the keynote address marking the third anniversary of Mr Mandela’s passing.

The Foundation, in collaboration with the Gauteng government and the City of Tshwane, hosted the third annual Mandela Remembrance Walk on Sunday 11 December 2016. The 5.3km walk from the Union Buildings passed through the city centre on the same route used to transport Mr Mandela’s body between 1 Military Hospital and the Union Buildings, where his body laid in state. Participants in the walk celebrated and reflected on Mr Mandela’s life and legacy.

The Foundation’s social-media channels have over the years seen phenomenal growth in terms of followers and views.

Although most of our social-media platforms have continued to grow year on year, it has slowed down to an extent and one channel, the Nelson Mandela public figure Facebook page, has shed a number of followers. It is difficult to ascertain the reason for the drop. The approach to enhance participation and broaden public reach for the Foundation’s work has been to improve the use of social media and the strengthen media relations in general.

The Foundation communication efforts have focused on profiling the institution through its various programmes. Key among these are the dialogues and outreach work. The media has been instrumental in disseminating information and engaging the public on these programmes.

The year under review has seen a growth in publishing opinion pieces that position the institution as the voice on issues of social justice.

To date, we have used our social-media platforms as a way of sharing Nelson Mandela’s words on various matters arising in our society and the world, as well as to host other content, including (but not limited to):

In driving traffic to the Foundation’s www.nelsonmandela.org and www.mandeladay.com sites, our social media channels featured in the top 10 referral sites, as illustrated below: 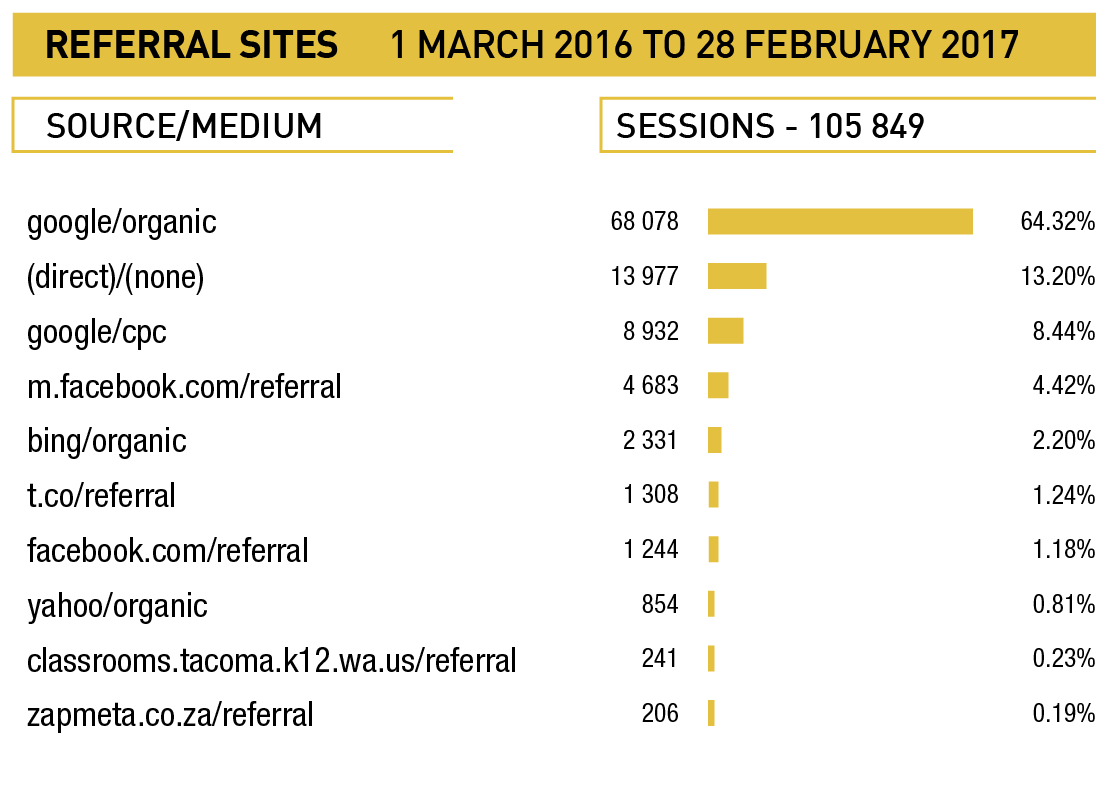 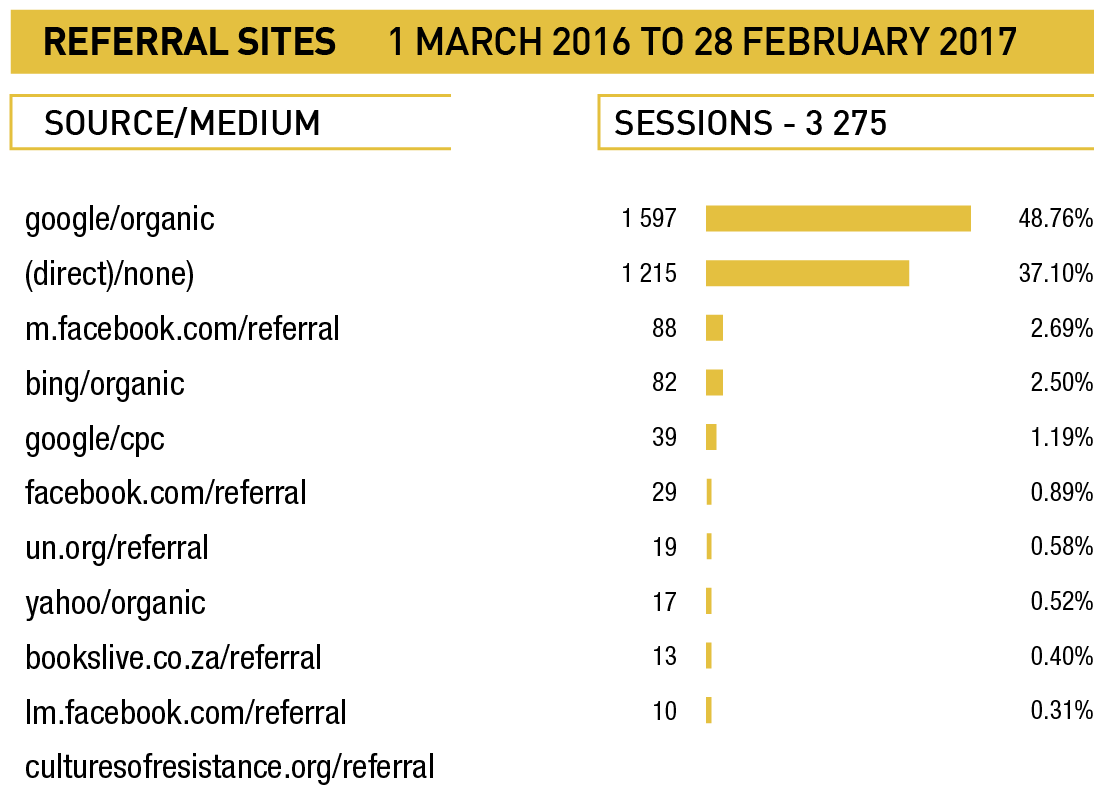